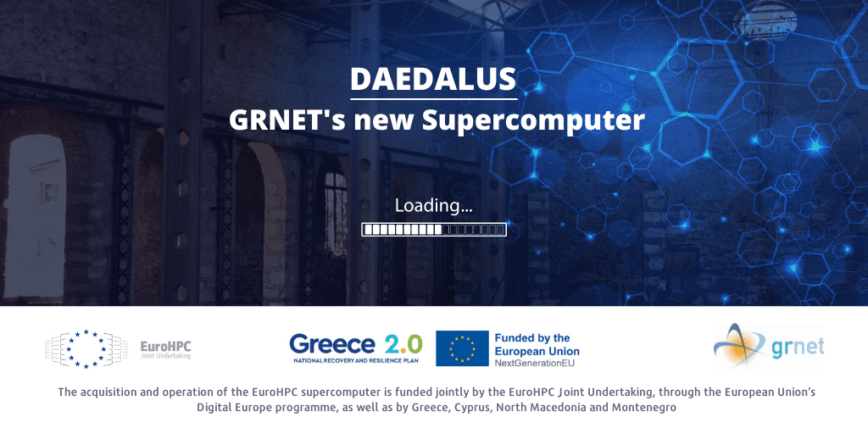 A hosting agreement has been signed between the EuroHPC Joint Undertaking and the National Infrastructures for Research and Technology (GRNET) in Greece where DAEDALUS, a new EuroHPC supercomputer will be located.

Once procured, DAEDALUS will be a mid-range supercomputer, able to perform more than 30 petaflops or 30 million billion calculations per second. This new supercomputer will be managed and operated by GRNET, the National Infrastructures for Research and Technology in Greece. DAEDALUS will be installed in the historical 19th century Electric Power Station building in Lavrion Technological and Cultural Park of the National Technical University of Athens, and is expected to have an overall surface area of 1500 m2.

The supercomputer will power new applications in a wide range of areas, such as engineering, chemistry, health sciences and will be used to visualise and solve scientific problems. It will advance science and boost the innovation potential of enterprises while improving the European citizens’ quality of life.

DAEDALUS, at a total acquisition cost of EUR 33 million, will be co-funded with a maximum total budget of up to EUR 10 million by the EuroHPC JU (35%) and Greece (65% of national funds). Cyprus, Montenegro and North Macedonia are also involved in the project as members of the DAEDALUS consortium. This partnership is strategic for the European Union as it will support science and technology in the wider area of South-East Europe.

DAEDALUS supercomputer will be available to serve a wide range of users in the scientific community, industry and the public sector located in Greece and across Europe, who need to use the power of supercomputing. Access to the computing resources of the new machine will be jointly managed by Greece and the EuroHPC JU in proportion to their investments.

The hosting agreement, which has now been signed, is a contractual document that defines the roles, rights and obligations of each party.  The procurement process for this new supercomputer will be managed by GRNET in collaboration with EuroHPC JU and will begin in the immediate future. The preparation of the data centre that will locate DAEDALUS will be managed by GRNET and will take place in parallel to the procurement.

In June 2022, the EuroHPC Joint Undertaking announced the selection of new sites to host new world-class supercomputers. These hosting entities have been selected as a result of two calls for expression of interest launched in December 2021

The EuroHPC JU is a legal and funding entity, created in 2018 and recently reviewed by means of Council Regulation (EU) 2021/1173, with the mission to:

In order to equip Europe with a world-leading supercomputing infrastructure, the EuroHPC JU has already procured eight supercomputers, located across Europe. Five supercomputers are now fully operational:  LUMI in Finland, LEONARDO in Italy, Vega in Slovenia, MeluXina in Luxembourg, Discoverer in Bulgaria and Karolina in the Czech Republic. Two more supercomputers are also underway:  MareNostrum5 in Spain and Deucalion in Portugal.

GRNET, operating under the auspices of the Ministry of Digital Governance in GREECE.

GRNET – National Infrastructures for Research and Technology, provides advanced network, cloud computing and IT infrastructures and services to academic and research institutions, to educational bodies at all levels, as well as to agencies of the public, broader public and private sector. It holds a key role as the coordinator of all e-Infrastructures in education and research, leveraging the educational and research activity in the country towards the development of applied and technological research. GRNET, operating under the auspices of the Ministry of Digital Governance, contributes to the country’s digital transformation via in-depth analysis, technological studies, standard solutions and specialized know-how, develops and executes the strategy for national digital competencies, while serving for more than 24 years, on a daily basis, hundreds of thousands of users, in the strategic fields of public administration, education, research, health and culture.
Lavrion Technological and Cultural Park (TCPL)

The Lavrion Technological and Cultural Park was founded in 1992 in the facility of the old French Mining Company of Lavrion (Compagnie Française des Mines du Laurium), at the initiative of the National Technical University of Athens. The Park occupies a space of 60,78 acres, which includes 41 building units of a total area of 25,000 m2, and constitutes a protected national monument as a whole. (Ministry of Culture, 1992). Today in the TCPL site there are hosted more than 20 institutions: NTUA’s laboratories, start-up businesses and educational institutions. Educational, scientific and cultural activities are often organized in TCPL premises. GRNET will manage the preparation of the data centre that will locate DAEDALUS in one of the buildings located on the TCPL site.